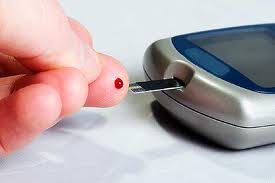 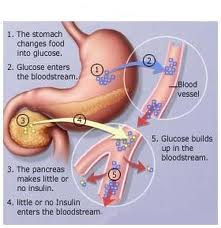 In diabetes the elevated blood sugar (glucose) levels are due to absolute or relative insufficiencies of insulin, a hormone produced by the pancreas. Insulin is a hormone that is involved in regulating how the body converts sugar (glucose) into energy. It normally works in the following way:

Typical symptoms of diabetes include excessive thirst, fatigue, frequent illness or infections, poor circulation (including tingling or numbness in the feet or hands), wounds that do not heal, blurred vision, and unintentional weight loss. Many people with type 2 diabetes have no symptoms, and it is discovered after testing for other medical problems or through screening in persons at high risk of developing type 2 diabetes.

There is no such thing as a single diabetes diet. Patients should meet with a professional dietitian to plan an individualized diet within the general guidelines that takes into consideration their own health needs. General dietary guidelines for diabetes recommend:

Both low blood sugar (hypoglycemia) and high blood sugar (hyperglycemia) are of concern for patients who take insulin. It is important, therefore, to monitor blood glucose levels carefully. Patients should aim for the following measurements: 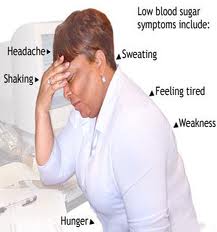 It is important to quickly treat hypoglycemia and raise blood sugar levels by eating sugar, sucking on hard candy, or drinking fruit juice. Patients who are at risk for hypoglycemia should carry some sugar product, or an emergency glucagon injection kit, in case an attack occurs.

In rare and worst cases, hypoglycemia can lead to coma and death. Regular blood sugar monitoring throughout the day can help you avoid hypoglycemia. Patients are also encouraged to wear a medical alert ID bracelet or necklace that states they have diabetes and that they take insulin.

Six kinds of diabetes medicine are available in pill form: 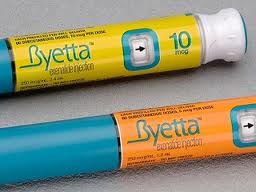 Insulin lowers blood sugar by allowing it to leave the bloodstream and enter cells. Not everyone needs insulin. People with type 1 diabetes can’t make their own insulin. They must take insulin every day. Insulin is usually injected under the skin. In some cases, a pump delivers the insulin continuously. Insulin does not come in pill form.

Insulin preparations differ in how fast they start to work and how long they last. The health care professional will review your blood glucose levels to determine the appropriate type of insulin you should use. More than one type of insulin may be mixed together in an injection to achieve the best blood glucose control.

Insulin cannot be taken orally because the body’s digestive juices destroy it. Injections of insulin under the skin ensure that it is absorbed slowly by the body for a long-lasting effect. The timing and frequency of insulin injections depend upon a number of factors:

Fast-Acting Insulin: Insulin lispro (Humalog) and insulin aspart (Novo Rapid, Novolog) lower blood sugar very quickly, usually within 5 minutes after injection. Insulin peaks in about 4 hours and continues to work for about 4 more hours. This rapid action reduces the risk for hypoglycemic events after eating (postprandial hypoglycemia). Optimal timing for administering this insulin is about 15 minutes before a meal, but it can also be taken immediately after a meal (but within 30 minutes). Fast-acting insulins may be especially useful for meals with high carbohydrates.

Regular Insulin: Regular insulin begins to act 30 minutes after injection, reaches its peak at 2 – 4 hours, and lasts about 6 hours. Regular insulin may be administered before a meal and may be better for high-fat meals. 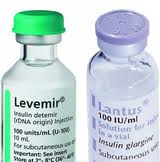 Combination: Regimens generally include combinations of short and longer-acting insulins to help match the natural cycle. For example, one approach in patients who are intensively controlling their glucose levels uses 3 injections of insulin, which includes a mixture of regular insulin and NPH at dinner. Another approach uses 4 injections, including a separate short-acting form at dinner and NPH at bedtime, which may pose a lower risk for nighttime hypoglycemia than the 3-injection regimen.

Insulin Pens: Insulin pens, which contain cartridges of insulin, have been available for some time. Until recently, they were fairly complicated and difficult to use. Newer, prefilled pens (Humulin Pen, Humalog) are disposable and allow the patient to dial in the correct amount.